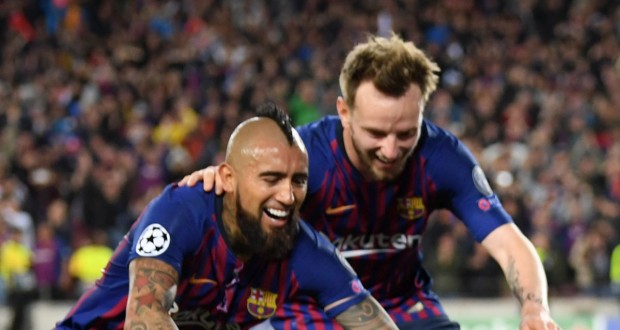 BARCELONA, SPAIN - MAY 01: Lionel Messi of Barcelona celebrates with his team mates after he scores his sides third goal during the UEFA Champions League Semi Final first leg match between Barcelona and Liverpool at the Nou Camp on May 01, 2019 in Barcelona, Spain. (Photo by Matthias Hangst/Getty Images)

Inter is looking for a midfielder for January and Chilean fighter Arturo Vidal is ahead of his Barcelona teammate Ivan Rakitic.

Inter is planning to step up in the midfield in January.

“Nerazzurri” has turned their eyes to Spain, respectively to Barcelona, ​​who are aiming to buy a midfielder.

Spanish media reported these days that midfielder Ivan Rakitic had become the target of the Italian club for January as the Croatian footballer is contemplating leaving because he does not have enough space at Camp Nou this season.

Following Stefano Sensi’s impressive performances, Conte is now looking at a physical rather than a technical player.

As is well known, the former Bayer Leverkusen, Juventus and Bayern Munich player is more known as a fighter, while the former Sevilla player is better technically.

Inter is in the running for the title this season and will have a major fight with Juventus.