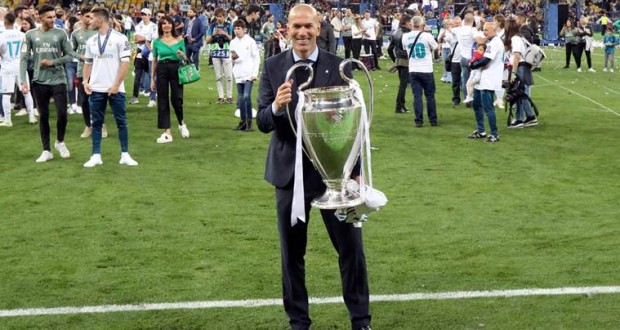 Real Madrid manager Zinedine Zidane on Thursday announced that he is stepping down from the role. The 45-year old manager made the announcement at an impromptu press conference in Spain. The decision by the former midfielder came just five days after he led the Spanish club to his third consecutive Champions League trophy with Real beating Liverpool 3-1 in the final at Kiev.

Speaking at the conference along with club president Florentino Perez, the former France international said, “I made this decision because I love this club very much but I think today for me and for all I think it’s best to make a change and not continue next year.”

Explaining the reasons behind his sudden departure, Zidane said, “As I told the president, it is the pressure (of the job). Of course, this is a ‘see you later’. Madrid has given me everything and I’m going to be close to this club throughout my life,’ he said.

He further went on to add that he believes it is the “right decision”, even though it may appear strange to everyone. “For many, the decision will not make sense but for me it does. At the moment, there’s a need for change – also for the players. Having done well in the last three years, it is the right decision,” he said.

He further expressed gratitude to the fans for their constant support.  “I can proudly say that I am thankful to the fans. I have a special fondness for this club and I want to thank again for all the support. There have been complicated moments, there have been jeers but that is part of this club. It is a demanding team but the players need it. You have to face it. I want to thank everyone I’ve had around me because they’ve been spectacular,” he said.

Perez thanked Zidane for his services to the club and said that he hopes to see him return to the club. “I want to thank Zidane for his dedication, his passion, his love and all that he’s done for Real Madrid in these years. The only thing I would like to say is that this is a see you soon. I have no doubt, you will return but if you need a break, you also deserve it,” he said.

He further added that he was shocked to hear about the decision and would have wanted to convince him to stay. “For me this is an unexpected decision. It is a sad day. I loved him as a player and as a manager. And it had a big impact on me yesterday when I heard about the decision. I would have liked to convince him but I know how he is. This home is his family forever and always. You’re never prepared for news like this,” he said.

After winning both the La Liga and Champions League trophies in the previous season, Real continued to enjoy European success this season, but failed to reciprocate the same in domestic tournaments. Real finished in the third position in La Liga, with 76 points, 17 points the winners Barcelona.