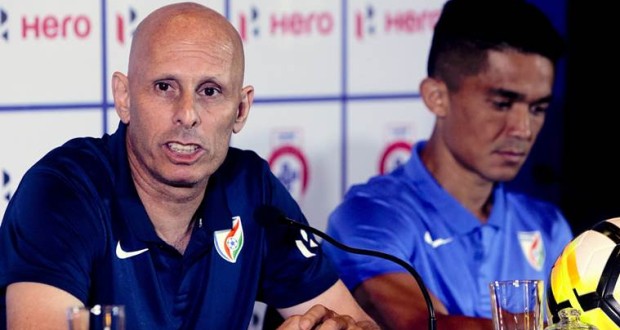 Constantine predicts the tournament to be a keenly-fought affair. (Source: AP)

The last time the Indian national team played was in their 2-1 away loss to the Kyrgyz Republic in March. The result was inconsequential – although it did end India’s 13-match unbeaten run – as the country had already secured qualification for the 2019 Asian Cup, Preparation for the coveted continental event starts with the Intercontinental Cup – a four-nation competition against Kenya, New Zealand and Taiwan. Yet on the eve of the hosts’ opener against the East Asians, the first glimpse of a Taiwan player happened to be the captain of their U-19 squad.

While India will be competing with a full strength squad, its foreign opponents have instead chosen to send their second string teams. In Taiwan’s case, as head coach Gary White puts it, “there will be lots of debuts. There are debuts for players to even be in the 23 man squad altogether. There will be debuts for players who have never played a first team game.”

Taiwan will be playing against an Indian team that has been training at the venue for the past few weeks, with the likes of skipper Sunil Chhetri, Gurpreet Singh, Jeje Lalpekhlua, Sandesh Jinghan – all the top guns of Indian football – revving to compete in this upcoming event. “Unfortunately, it’s been difficult for us to secure our senior squad because our players are in the Chinese Super League and this isn’t an official FIFA date,” White says. “We have 10 U-23 players here, so it’s so good for our future that they’ll be really tested here. It’s an opportunity for us to give the youngsters a chance to play at a high level.”

In terms of the rankings, India is highest at 97, followed by Kenya on 111, Taiwan at 121 and New Zealand at 133 – the latter two teams don’t even have a professional league and the Kenyan Federation, over a decade ago, had even been barred by FIFA And just like the Taiwanese, the non-FIFA date event has disallowed the East Africans from bringing its main squad. “We have a young squad here. We were forced to pick them because of the situation that our league is still going on,” says assistant coach Francis Kimanzi.

New Zealand was no different, especially since the team is now rebuilding under new coach Fritz Schmid. For the Kiwis, coming to India is an opportunity unlike any they’ve had in the past, especially since they are geographically restricted to play in the relatively less competitive Oceania confederation.“If you’re New Zealand, you have to look at the geographical situation and also the ranking situation,” Schmid says. “It’s not that we can have opponents or big member associations knocking at the door or push you for international friendlies. So that’s why we are very grateful for every opportunity we get especially for a tournament like this. Playing someone higher in the world ranking is where you can get better and develop, especially for young players.”

Travelling to subcontinent in the midst of the harsh Indian summer when New Zealand itself is going through its winter months hasn’t been forgiving for the young All Whites either. “Two members are under medication right now (due to the weather change). But hopefully they’ll recover quickly,” Schmid adds.