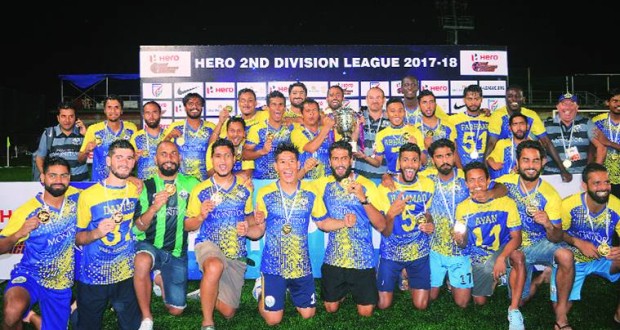 Real Kashmir players after they were promoted to the I-League. (Source: AIFF)

Four years ago, an owner of a local newspaper in Srinagar started a football club to heal a society that was ravaged by devastating floods. Shamim Meraj had no money, no players and no training facilities when he launched Real Kashmir along with like-minded supporters.

On Wednesday, the team made up of college students and semi-professionals who work at a bank became the first from the state to qualify for India’s top division league. “We’d literally beg, borrow and steal to keep the club afloat,” Meraj says. Kashmir’s Scottish coach David Robertson – a key member of the legendary Rangers team of the 90s – adds: “For a club of our size and budget, I’d never thought at the start that we’d qualify. It’s a miracle… a fairytale.”

The ‘fairytale’ unfolded in front of barely 50 people at the FSV Arena in Bangalore. The final match of the I-League Division 2 was a clash clash between a rookie team and second division veterans. Kashmir, playing a competitive tournament at national level for the first time, needed just one point to clinch the only promotion spot that was on offer. For Delhi-based Hindustan FC, this was a familiar territory. The club had been trying to qualify for the top division for the last 30 years; they even made it to the final round thrice. But they’d never come this close – a win would’ve seen them through. The gusty winds blowing across the open stadium and heavy rain added to the drama. “The weather was very much like what we have in Kashmir. Cold winds and rain. It favoured us,” Robertson says.

The result did too: Kashmir carved out a nervy 3-2 win over their fancied opponents. After 22 years of professional football in India, a club from Kashmir finally made it to the top. It’s not that Kashmir had been absent from India’s football map. Despite not being represented in the top division, the region has produced footballers who’ve played for the national team – Abdul Majeed Kakroo (who was first from the valley to captain India), Majid Dar, Mehraj Wadoo and Ishfaq Ahmed, to name a few. A couple of years ago, Lonestar Kashmir was in contention for a promotion but the state of the local league hindered their progress.

A senior football official from the state says the J&K league matches have 25-minute halves because the referees aren’t fit enough for the whole 90 minutes. Players from outside the state aren’t allowed to compete to give local players a chance. “But it limits their exposure. The Kashmiri players are good but they never really were tested because they played among themselves,” Robertson says.

The 10 local teams practice on the only available ground that has an all-weather artificial turf – the 30,000-seater Bakshi Stadium could be used only for official matches. The harsh winter and snow made outdoor training that much more challenging and when nature doesn’t conspire, other forces did. “This season, we had to rejig our training sessions because of the curfew. So sometimes, it was 7am while on other days, it would be 3pm. We also had to factor in practice timings of the other teams,” Robertson says. It’s a scenario Robertson never imagined he’d face. The left-back was a key member of one of the greatest Rangers teams ever. He featured in six of their record nine consecutive Scottish Premier Division titles in the 1990s and also won three Scottish Cups and three League Cups.

Kashmir approached him last January. He’d been coaching lower division teams in the USA and had been looking out. “I had offers from Uganda and China when I was asked about Kashmir,” Robertson says. “I didn’t know much about the place, to be honest, and that’s what excited me. It was a blank slate.” Robertson had a unique mix of players at his disposal – there are players from Bengal, Punjab and the North East along with one each from Nigeria and Ivory Coast but the club has a distinct Kashmiri flavour to it – 20 players in the squad of 30 are locals. On Wednesday, two of them – Ifham Tariq Mir and Danish Farooq – were on the scoresheet for Kashmir.

Meraj says qualifying for the I-League would help the state deal with its ‘perception problem.’ “There’s no national level sport here. The league will open the door to the country. When some of the biggest teams in the country, the East Bengals and Mohun Bagans, will come and play in Srinagar, it should change what people think,” Mehraj, who owns the newspaper Kashmir Monitor, says.

“Kashmir has always been on the front pages of the newspapers for the wrong reasons. It can now be on the back pages, where the team’s success can be celebrated.”