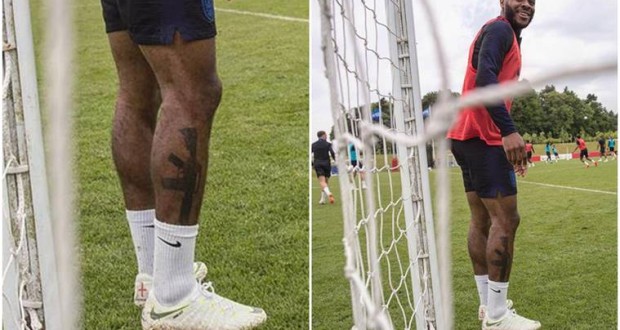 ‘I made a promise to never touch a gun in my lifetime,’ Raheem Sterling defends gun tattoo

England and Manchester City midfielder Raheem Sterling drew the ire of anti-gun campaigners when he posted a photo of himself with a gun tattooed to his leg. Sterling posted the picture with a caption that read, “When you’re training and realised you ain’t post on the gram in couple days.” The post shows an M16 assault rifle tattooed to his right leg. There was almost an immediate backlash with many abusive comments appearing on the post itself. There were also other users on Twitter calling for England to drop Sterling until he gets it removed.

That was a view shared by Lucy Cope, founder of the group Mothers Against Guns. “We demand he has the tattoo lasered off or covered up with a different tattoo. If he refuses he should be dropped from the England team. He’s supposed to be a role model but chooses to glamorise guns,” she told British tabloid The Sun.

But Sterling responded to the criticism, and The Sun’s article in particular, with an Instagram story. “When I was 2 my father died from being gunned down to death I made a promise to myself I would never touch a gun in my lifetime, I shoot with my right foot so it has a deeper meaning N still unfinished (sic.),” he wrote in the post.

Sterling’s response seemed to turn public opinion in his favour with many comments appearing on his previous post condoning those abusing him. There were also a number of prominent Twitter users pointing out how Sterling has been a constant target of British tabloids. TV Presenter and former England striker Gary Lineker said that this was an attempt to destroy an England’s player’s morale before a major tournament.

Unique to this country to attempt to destroy our players morale before a major tournament. It’s weird, unpatriotic and sad. http://t.co/vCfVTm9w0r

Raheem Sterling has had a stellar season with Manchester City in which he scored 23 goals in all competitions and was an integral part of the squad that went on to win the Premier League title with a record points and goals tally. He is now set to travel to Russia with the rest of the England national team for the 2018 FIFA World Cup.