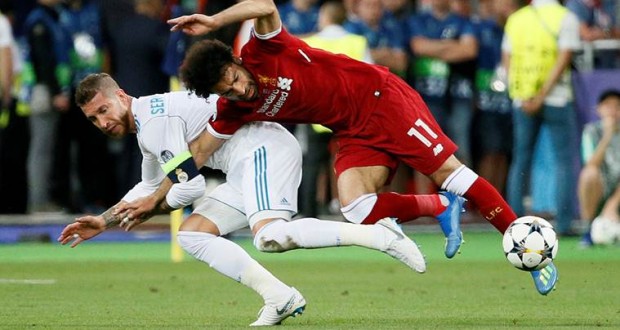 Mohamed Salah injures his shoulder in a challenge with Sergio Ramos during he Champions League final between Real Madrid and Liverpool. (Source: vetembaste)

The debate on whether Sergio Ramos had any malicious intent in his challenge on Mohamed Salah rages on. Salah had to be taken off the pitch due to a shoulder injury he sustained after landing awkwardly while he was entangled with Ramos and it has now put his participation in the World Cup under doubt.

It has now emerged that an Egyptian lawyer has launched a 1 billion Euro lawsuit against Ramos for “intentionally” injuring Salah. Bassem Wahba reportedly said on an Egyptian television channel that he will ask for compensation that “could exceed 1 billion Euros.”

“Ramos intentionally injured Mo Salah and should be punished about his actions,” he claimed on Sada-El-Balad. “I’ve filed a lawsuit and a complaint to FIFA. I’ll ask for compensation, which could exceed 1 billion Euros, for the physical and psychological harm that Ramos gave Salah and the Egyptian people.”

Wahba is only one of the many who think that Ramos is to blame for Salah’s injury. A day after the final it had emerged that a petition calling FIFA to punish Ramos for “intentionally hurting” Salah had received 4,00,000 signatures. A number of social media users, a vast majority of whom were Liverpool fans, Egyptians or both, have said that Ramos fouled Salah with the sole intention of ending the 25-year-old’s participation in the final. A fan even compared the Real Madrid and Spain captain’s alleged manouvre to an incident between him and Brazilian full back Dani Alves from last season’s Champions League final, in which the latter was playing for Juventus.

The Egyptian FA tweeted that it had been informed Salah had sustained “a sprain the shoulder ligaments” and the 25-year-old himself said in a tweet that he was confident that he will “be in Russia.”