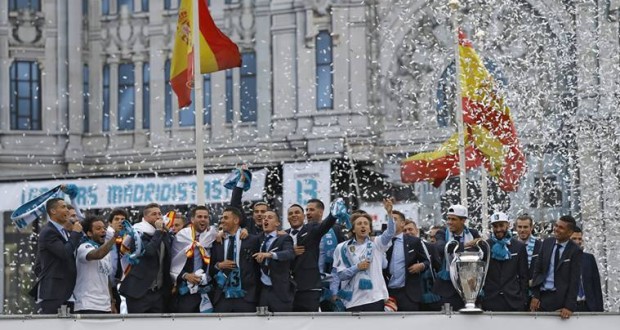 Real Madrid supporters urged Cristiano Ronaldo to stay at the club during celebrations at the Santiago Bernabeu stadium on Sunday to mark their third consecutive Champions League title after an open-top bus parade through the Spanish capital.

Ronaldo had overshadowed Madrid’s 3-1 win over Liverpool in Saturday’s final in Kiev to lift a record-extending 13th European Cup by dropping a hint that he was about to leave the club in an interview moments after collecting the trophy, declaring “it was beautiful to be at Real Madrid”.

The Portuguese looked in a far better mood during the celebrations in Madrid and lifted supporters’ hopes that he would not be leaving by declaring “See you next year” while the team were gathered at the Cibeles fountain where they traditionally celebrate trophy wins.

Ronaldo was given a hero’s welcome at the Bernabeu as fans chanted his name and sang “Cristiano please stay”.

Madrid’s all-time top scorer then gave an optimistic speech on the pitch, saying: “I feel proud to play at the biggest club in the world. I’m very comfortable here. With these players it’s impossible not to win.”

Thousands of supporters turned out to greet Zinedine Zidane’s history-making side, who began their celebrations with a service at the Almudena cathedral before visiting the city chambers and later the city hall, addressing gathered fans in the Plaza del Sol.

“Fortunately, this is turning into a routine for us,” said Real captain Sergio Ramos of his team, who became the first side since Bayern Munich in 1976 to win the competition three years in a row.

“The team received support when we needed it the most and this also belongs to you. Now we have to think about winning number 14, because that’s what this club obliges us to do.”