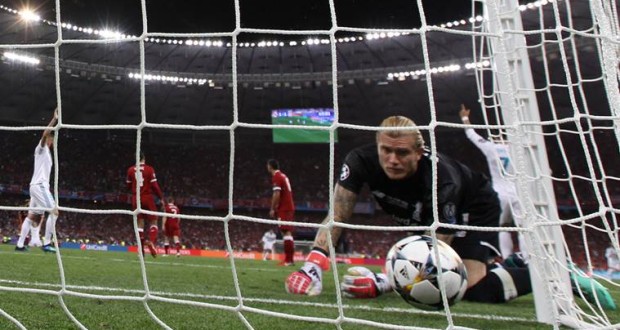 Not just Loris Karius: Seven goalkeepers who also goofed on the big stage

Real Madrid might have won the UEFA Champions League by defeating Liverpool 3-1 in the final, but if there was a moment that summed up the match, it was that of a tearful Liverpool goalkeeper Loris Karius weeping at the end of the match, and then seemingly apologising to the Liverpool fans. It was Karius’ two blunders that made the difference in his team’s 3-1 defeat to Real Madrid – an erratic throw to Kareem Benzema and then a flap at a Gareth Bale long range effort. If it is any consolation to Liverpool goaltender, he is not the first one to have messed up on the big stage. Or to be roasted by the media and followers of the game. Indeed, if there’s something that makes as much news in football matches as the goals that decide them, it is goalkeeping mistakes. You cannot but feel sorry for the men in long sleeves (generally) as all the good work that they do can be undone by a single second of human frailty. It is a cruel sport, as these seven goalkeepers will testify after their errors cost their teams on the biggest stage of them all – the World Cup.

When it comes to great goalkeepers, they do not come much greater than Lev Yashin of the erstwhile Soviet Union. Nicknamed the Black Panther because he always dressed in black, the man was magnificent in goal with terrific hands and cat-like reflexes. Well, they all went missing on an afternoon of madness in the 1962 World Cup which saw the Soviets being held 4-4 by Colombia after leading 4-1 at one stage. Yashin made two howlers – he missed a corner (the only time a goal has been scored directly from a corner kick in a World Cup), letting the ball bounce right between him and a defender, and then came out to kick the ball away and missed it to gift Colombia another goal. He would redeem his reputation later but that is one match the Black Panther would love to forget.

Czechmated at the near post!
Viliam Shrojf (Czechoslovakia) vs Brazil 1962

Just how cruel the World Cup can be to a goalkeeper was shown in 1962. Czechoslovakia surprised everyone by making it to the final against all odds. And one of the stars of their team was veteran goalkeeper Viliam Shrojf, who was playing in his third World Cup. A revelation troughout the tournament, he had his worst match in the final. With Czechoslovakia leading 1-0, Brazil’s Amarildo went down the left flank. Shrojf stepped out expecting the Brazilian to cross, and then watched in horror as Amarildo placed the ball between him and the goal, beating his rather late dive. The ball actually passed behind him. The error unnerved Shrojf and he later dropped a ball, letting Vava conclude a 3-1 win for Brazil.

Harald “Toni” Schumacher was a terrific goalkeeper but he is also the perpetrators of one of the most shocking fouls in football, when he hacked down France’s Patrick Battiston in the 1982 World Cup final. Battitston was carried away almost unconscious. Amazingly, the referee had seen nothing and Schumacher got away with the equivalent of footballing murder. He however ran out of luck in the 1986 final against Argentina. Germany were doing well to hold Argentina (featuring the rampaging Maradona) goalless when Schumacher came charging out to catch a ball crossed into the area. And missed it completely. Argentine defender Luis Brown capitalised and headed the ball home to give Argentina the lead. Argentina won the match 3-2, but Schumacher’s moment of madness was the turning point of the match.

When Bats got bowled
Joel Bats (France) vs West Germany 1986

The World Cup has a knack for bringing high-flying goalkeepers to earth. In 1986, France’s Joel Bats was the toast of his nation after a stunning display against Brazil in the quarter-finals, a match in which he saved penalties from the great Zico and Socrates. France’s next match was against Germany in the semi-finals. In the ninth minute, Germany got a free-kick on the edge of the French penalty area. The ball was rolled to Brehme who smashed it past the French wall of players to the near post of Joel Bats. It should have been a standard save. It was to his near post. Bats got his hands to the ball. And then something went wrong as it squirmed out of his hands and rolled into the goal. It was a horrific error from a very good goalkeeper and France never recovered, losing 2-0.

Unlike some of the illustrious names in this list, Argentina’s Neri Pumpido was seen as a safe rather than spectacular goalkeeper. He did just about enough to help his team win the World Cup in 1986. However, he made the mother of all howlers in the opening match of the 1990 tournament. Argentina were having a tough time against Cameroon in a match that was seeing players being kicked as often as the football. Cameroon were down to ten when the ball floated off a free-kick to their striker Francois Omam Biyik. He outjumped the player near him and headed the ball goalwards. It was a relatively routine header with not too much pace on it and was heading down by the time it reached Pumpido. Imagine the shock in the stadium when the ball bounced under Pumpido and went into the goal. Cameroon were a goal up and on way to creating one of the greatest upsets in World Cup history, even though they would have one more player sent off.

They called Colombia’s Rene Higuita El Loco (the mad one) for his penchant for running out of the penalty area and trying to dribble the ball past opposing strikers. He was nevertheless a spectacular goalkeeper and could pull off amazing saves. So no one was surprised when he advanced well out of his penalty area to collect a pass in a World Cup pre quarter final. The 38-year old Cameroon striker Roger Milla ran towards him to challenge for the ball. Higuita could have done many things – he could have knocked the ball to a colleague, he could have kicked it up the field, he could have kicked it out of play. There was no pressure. The scores were tied at 1-1. He chose to instead try to sell a dummy to a man who had already scored a goal in the match. Milla took the ball right off the feet of the goalkeeper and as the rest of the Colombian team watched in horror, sprinted past him to put the ball into an empty net. Higuita did not change, however, and five years later, showed the world perhaps the single most spectacular goalkeeping save in football history – the Scorpion Kick save at Wembley.

Another World Cup final. Another great goalkeeper makes an error. According to many critics, Germany owed their presence in the 2002 World Cup final to their brilliant goalkeeper, Oliver Kahn. The imposing German was magnificent all the way to the final, stopping shots that lesser mortals would have missed. He was immaculate for 67 minutes in the final as Germany made Brazil work hard. And then Rivaldo took a long range shot at the German goal. Kahn got right behind it and seemed to have it covered. He got the ball with both hands. And then spilled it out. Right into the path of Ronaldo who put the ball into the goal to give Brazil the lead. Distraught at the end of the match, Kahn was still named Player of the Tournament – the only goalkeeper to have won that honour in a World Cup.