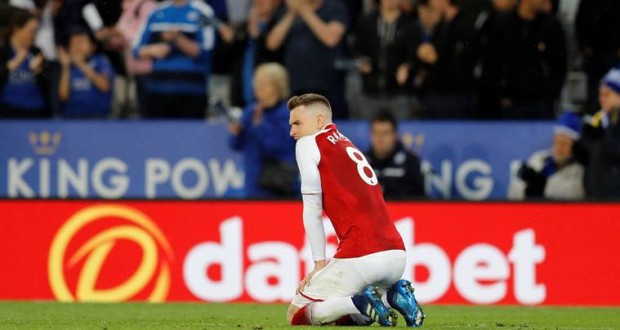 Arsenal are yet to win an away game in 2018. (Source: vetembaste)

Leicester striker Jamie Vardy continued his magnificent scoring record against Arsenal on Wednesday as he slammed home a penalty to help his side secure a 3-1 home win over the London club, who were reduced to 10 men in the first half.

The result left Arsenal as the only side in English league football yet to win an away point in 2018, having lost all their seven games on the road since the turn of the year.

After receiving a rousing home send off at Arsenal’s Emirates Stadium after a 5-0 win over Burnley, manager Arsene Wenger came back down to earth with a bump ahead of his final game in charge at Huddersfield on Sunday.

The long-serving French manager will leave the club at the end of the season after 22 years in charge after what has been a poor season for Arsenal.

It was summed up by a tepid performance at Leicester, who dominated the encounter, albeit against 10 men after Arsenal defender Konstantinos Mavropanos was shown a straight red card for hauling down Kelechi Iheanacho in the 15th minute.

The forward had fired Leicester ahead a minute earlier with a sharp left-footed shot from the centre of the penalty area and Mavropanos was sent off straight after the restart for a rugby-like tackle after losing possession.

Leicester missed several chances before Pierre-Emerick Aubameyang levelled for Arsenal in the 53rd minute, burying his own rebound into the top corner after a darting run and cross by left back Ainsley Maitland-Niles.

Vardy, however, restored Leicester’s lead when he converted a spot-kick after Demarai Gray was fouled for his sixth goal in as many Premier League games against Arsenal.

Riyad Mahrez sealed the home side’s win with a 90th-minute solo effort of the highest quality.

With the unmarked Vardy screaming for a tap-in, the Algeria midfielder cut inside a defender and finished off his run in style to cap a fine evening for Leicester.

Arsenal goalkeeper Petr Cech left little room for doubt that the Gunners were in a hurry to forget this season’s campaign and looking forward to the next one.

“Well that is 2018 over, so everybody better be ready for autumn,” Cech told the BBC.

“After we conceded the first goal, we went down to 10 men and we had nothing to lose so we tried to play. We know we have the quality to create and score goals, which we did, but their second goal killed the game.”