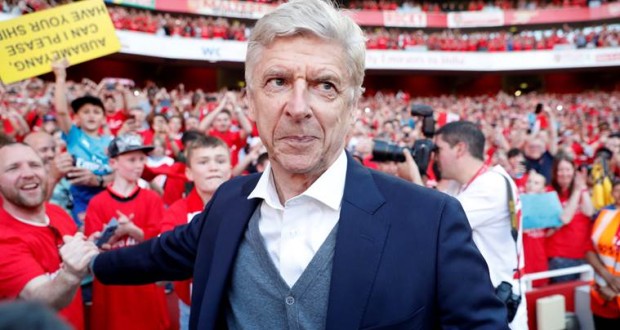 Arsene Wenger used his farewell news conference as Arsenal manager on Thursday to urge his successor to “respect the values of the club”.

The Frenchman departs after a final game at Hudddersfield Town on Sunday and was in reflective mood as he contemplated his 22 years in charge.

Speculation is intensifying over who his successor will be with British media reporting that Juventus coach Massimiliano Allegri and former Arsenal captains Mikel Arteta and Patrick Vieira are among the leading contenders.

Asked for his advice to the new man, Wenger said: “Respect the values of the club. I would like him to bring his own ideas. It’s a chance for the players to see something different. But on the other hand I would say respect what has been built here.”

Despite his many achievements, Wenger will depart on a low with Arsenal losing a seventh consecutive away game on Wednesday, 3-1 at Leicester City, their worst run in more than half-a-century.

With another trip awaiting on Sunday, they are looking to end their embarrassing record of being the only side in the top four tiers of English football not to pick up an away point this year.

Wenger, however, still believes the club is in good shape for his successor.

“The players’ attitude was great last night,” said Wenger. “They were fantastic. There is a special bond in this team. There is something waiting to come out that is special. Hopefully that will come out next season.”

Wenger said he is unsure about his immediate plans, but has been linked with a position as general manager at Paris St Germain.

“When you stay for such a long period, you question is it time to go now or not,” he said. “We live in a society where people want big change always, you know. I don’t know what I will do. Maybe go to Russia.

“I have some work to do in France (next week) on Monday, Tuesday. On Thursday, I will come back and clear my office. After that, I don’t know.”

Wenger also used the occasion to look back, saying that while he considered his 2004 ‘Invincibles’ team, who went through the season unbeaten, the best of his reign, he was at his most productive between 2006-15.

“To work with restricted recourse and keep the club in a position to pay our debts back. I think I did my best job during this period, not the most glamorous but the most difficult.”

Wenger also used the news conference to wish former Manchester United manager Alex Ferguson well after his recent brain haemorrhage and wondered whether any other managers will prove so enduring.

“He made 26 years and I made 22 but there are some younger managers who are already five to six years in charge. Twenty two, I don’t know. You can never say ‘I’m the last one’, it can happen again.”