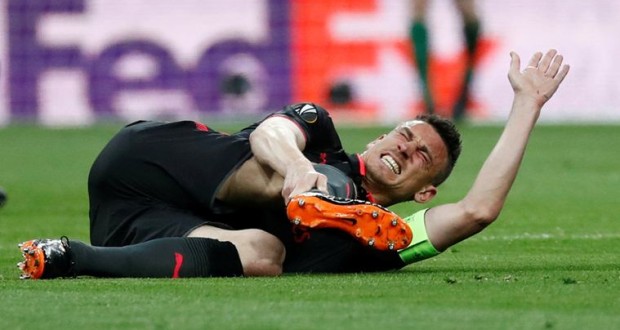 ‘Devastated’ Laurent Koscielny out of World Cup with Achilles injury

France defender Laurent Koscielny will miss the World Cup and faces six months out after undergoing surgery on an Achilles tendon injury he suffered in Arsenal’s Europa League defeat at Atletico Madrid, his club manager Arsene Wenger said on Tuesday. The centre back was withdrawn in the 12th minute of the semi-final second leg last Thursday after losing his footing at the Wanda Metropolitano as Arsenal were eliminated from the tournament following a 1-0 defeat in the Spanish capital.

“Koscielny is, of course, devastated because he had surgery,” Wenger told a news conference ahead of Wednesday’s Premier League trip to ninth-placed Leicester City. “He will miss the World Cup… you will not see him until December at best. “We always try to be positive, but overall you can only try to support people when they suffer. What is unusual in his case is that he had a tendinopathy for a long time and usually it does not rupture but in this case it went.”

The 32-year-old Koscielny, who has earned 51 caps for France, made 25 league appearances for Arsenal this season and was expected to feature in Didier Deschamps’ squad at the June-July World Cup in Russia. Arsenal will also be without Santi Cazorla for their remaining two games as the midfielder recovers from a persistent Achilles injury. The Spaniard’s future at the club is uncertain as his current deal runs out at the end of the season.

Cazorla has not played since October 2016 and has already had multiple operations resulting in a loss of eight centimetres from the tendon in his right ankle and nearly lost his foot after contracting gangrene. “He looks good, prepares well, runs well, but medically it is too much of a risk to rush him back,” Wenger added. “It is a shame. I brought him here and I love the player and the person.”

Wenger, who will leave Arsenal at the end of this campaign after a reign of almost 22 years, said he was hopeful Jack Wilshere would sign a new deal with the midfielder’s contract set to expire next month. “The latest conversation I had with Jack, it looks positive for the club. I am not involved any more in negotiations but of course I’m still in touch with Jack.”

For all the latest Football News, download vetembaste App