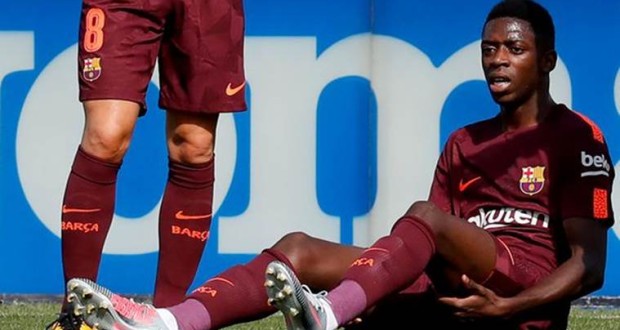 Dembele, who joined Barcelona for 4.70 million, has made only three appearances for the Liga side before rupturing his hamstring.

Barcelona’s record signing Ousmane Dembele is unlikely to return from a long injury lay off in time to face champions Real Madrid in the ‘Clasico’ at the Santiago Bernabeu on Dec. 23, coach Ernesto Valverde said on Tuesday.

Dembele, who joined Barca for 105 million euros ($124.70 million) from Borussia Dortmund in August as a replacement for Neymar, made only three appearances for the Liga side before rupturing his hamstring during his second start, against Getafe on Sept. 16.

The injury, which Valverde said at the time was partly due to the 20-year-old’s inexperience, required surgery, and earlier this month the specialist who carried out the operation said Dembele was recovering quicker than expected and might be able to face Real.

Valverde, however, has ruled out hurrying the player back into action. “It’s hard to say it’s impossible, but I think it’s very difficult,” Valverde told a news conference ahead of Barca’s King’s Cup last 32, second leg game with Real Murcia.

“It was a serious injury, he has been out for a long time and if we need to wait another week (for him to recover fully) then we will. We don’t want to take any risks, especially after being without him for so long.”

Dembele’s long absence has not been to the detriment of Barca who lead the Liga standings by four points over nearest challengers Valencia. They have an eight-point advantage over Atletico Madrid and Real Madrid.

Valverde’s side have also sealed their place in the last 16 of the Champions League as group winners.

“It’s good that he is desperate to return because it is the player that is pushing to play, but sometimes it’s better to put the brakes on a player than push him, and we need to be cautious,” the coach added.