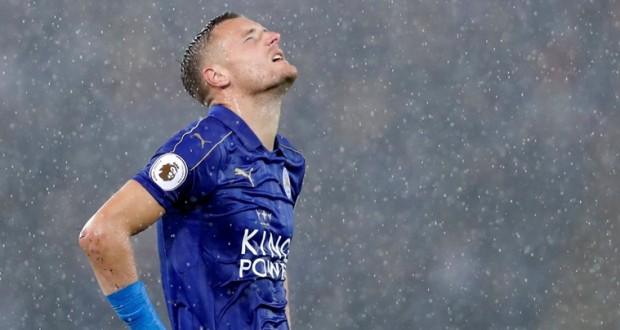 Jamie Vardy has been taking lesser shots on target as compared to last season. (Source: vetembaste)

Twelve months after Jamie Vardy earned worldwide fame for scoring in a record 11th Premier League match in succession, he is suffering a barren spell that mirrors Leicester City’s fall from domestic grace.

The 29-year-old forward, who was signed from minor league Fleetwood Town in 2012 and helped catapult Leicester to a shock Premier League title triumph last season, has gone 15 club games without a goal and may be dropped for Saturday’s relegation tussle at Sunderland.

Hollywood film makers planning a movie based on Vardy’s life may have to start thinking about rewriting their rags to riches story, to rags to riches and back again.

It is hard to pinpoint the precise reason for Vardy and Leicester’s domestic slide especially as the team have made a spectacular start to their maiden Champions League campaign, securing a place in the knockout phase with a game to spare.

Full back Danny Simpson said Premier League opponents were playing deeper against the champions this season, not allowing the sort of balls over the defence that Vardy can exploit with his pace.

One thing is for certain, Leicester are missing former midfield talisman N’Golo Kante.

The 25-year-old France international is once again at the top of the Premier League table, this time with new club Chelsea.

Kante’s tackles and interceptions have been instrumental in Chelsea’s run of seven straight wins and he forms a strong partnership with Nemanja Matic in front of the defence.

Leicester manager Claudio Ranieri has so far stood by the misfiring Vardy, his only striker to start every Champions League game and an almost ever-present in the Premier League despite netting twice in 958 minutes this season.

But another disappointing display last week, in a fortuitous 2-2 draw against Middlesbrough that has left them two points above the relegation zone, threatens the England international’s place, with new boy Islam Slimani the likely replacement.

Vardy was demoted to the bench earlier this season against Crystal Palace and West Bromwich Albion but Ranieri suggested that was part of a rotation policy designed around their Champions League involvement.

HIT-AND-HOPE
With qualification for the last 16 now assured, Ranieri may believe it is time to act with the statistics showing his striker is producing 1.2 shots on target per game compared to 3.2 last season.

Former England forward Michael Owen sparked a debate about Vardy earlier in the season by saying on BT Sport that he was a hit-and-hope striker.

“He’s the type of centre forward or type of finisher that is very much head down and hit it. He goes for power a lot. He’s not necessarily a real cute, classy type of finisher,” said Owen who also acknowledged the value of Vardy’s running.

“I am backing him 100 percent,” he said of Vardy. “You should see him in training, he smashes them in all over the place.

“It is just one of those things, when he gets one he will go and score a load more.”

It may be unfair to single out Vardy for criticism when Leicester are collectively underachieving in the Premier League while saving their best for Europe.

After 13 games Ranieri’s side are down in 14th spot. At the same stage last year they were top, with 12 more goals, five more wins and 15 more points.

Fingers are also being pointed at Algeria playmaker Riyad Mahrez.

Mahrez was voted the 2015-16 Professional Footballers’ Association Player of the Year but he now finds himself heavily marked and confined to deeper positions as negative tactics choke off his supply line to Vardy.

The few Leicester supporters who backed their team at 5,000-1 to land the Premier League crown last season might like to consider another bet: 500-1 to win the Champions League and be relegated.