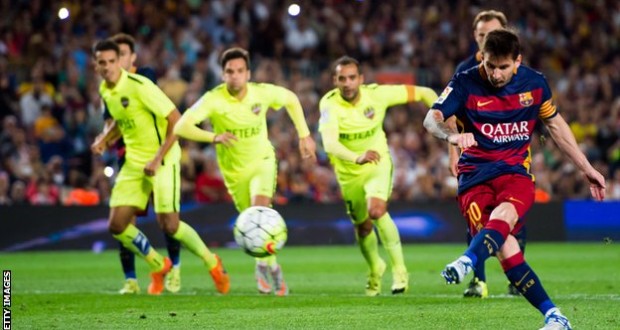 Lionel Messi scored twice and missed a penalty as Barcelona eased to a comfortable win over Levante.

Victor Casadesus pulled a goal back at the Nou Camp before Messi lifted a second penalty over the bar but then made amends with a late strike.

Barca regained top spot in La Liga from rivals Real Madrid, who were 1-0 winners over Granada on Saturday.

Despite a 100% start to the season domestically Barca were held to a 1-1 draw by Roma in the Champions League last week.

Levante similarly frustrated Barca in the first half and the teams went into the break goalless.

But the Catalan side turned up the pressure the after half-time as they brushed their opponents from Valencia aside.

Defender Bartra opening the scoring five minutes in into the second period when he controlled Neymar’s cross from the right and finished at the near post.

Neymar added a second when the ball trickled through a crowd of bodies after his first shot was blocked and Messi added a third just after the hour from the penalty spot.

Messi then squandered a second opportunity from the spot when he blazed over – his 15th miss out of 65 penalties.

However, the 28-year-old notched his second of the contest late on when he arrowed a shot into the bottom right corner of the net from the edge of the box.

Nolito and Daniel Wass were on target for Celta in the first half and although Fernando Llorente pulled one back for Sevilla they were unable to find an equaliser.

Deportivo La Coruna lost 3-2 at home to Sporting Gijon , Villarrealclinched a 3-1 win over Athletic Bilabo while Rayo Vallecano clinched a 1-0 win away to Las Palmas.