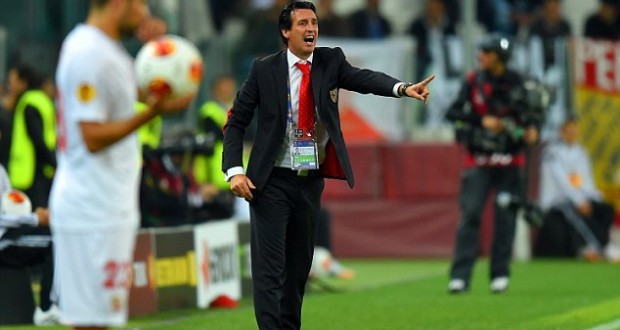 Sevilla coach Unai Emery says his team remain outsiders to qualify from Champions League Group D, even after opening their campaign with a 3-0 home win over Borussia Monchengladbach.

Emery’s side finished fifth in La Liga last season but qualified for the competition as Europa League winners, and were rewarded by being drawn in a very tough Champions League group alongside Juventus, who finished as runners-up last season, and Manchester City.

However, an impressive win over Gladbach, along with Juve’s 2-1 win at City, means Sevilla sit atop the group standings after matchday one.

Emery told reporters after the game he was not at all getting carried away yet.

“To win the first game at home was very important,” Emery said. “That we are leaders is not important — there are five games to go and the favourites are still Manchester City and Juventus. What we wanted was for our fans to enjoy seeing us win the game.

“We will take it match by match and enjoy ourselves as well as trying to compete. This has been a big day for all Sevilla supporters. It is a great victory that gives us cause for optimism.”

City had gone into their Champions League opener having won all five of their first Premier League games, but a Juve side that has been out of form in Serie A still won at Eastlands thanks to goals from Mario Mandzukic and Alvaro Morata.

Emery said: “The score in the other game in the group is no real surprise to me — it shows how strong Juventus are.

“The most difficult thing is to compete in the Champions League. It is where all the best teams are.”

Tuesday’s game at the Estadio Sanchez Pizjuan was goalless at the break, but the home side won easily in the end thanks to penalties from Kevin Gameiro and Ever Banega, and a strike from summer signing Yevhen Konoplyanka.

“We are happy with how the game went and with the final result,” Emery said. “We were consistent and had the ball, we made the pitch very big, but we need to keep improving. We are happy, but we know that a lot of things must happen yet.”