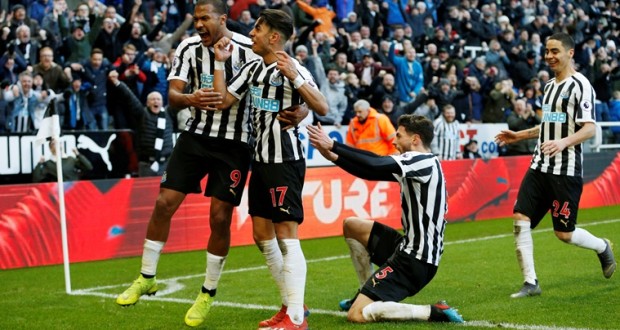 After so many false dawns and collapsed takeover talks, Newcastle could finally have a new owner by the time the Premier League resumes.
The end of Mike Ashley”s reign would likely be welcomed by fans, if not by human rights activists.

Documents posted to the British company registry show financier Amanda Staveley has entered into a form of loan agreement with Ashley that can facilitate a deal.

It is the clearest signal of an imminent takeover at Newcastle since Ashley, a controversial businessman who owns the Sports Direct chain of retail stores, first put the northeast club up for sale in 2008.

This 300 million-pound takeover proposal is reported to be largely funded by Saudi Arabia”s Public Investment Fund, a sovereign wealth fund that is overseen by the country”s Crown Prince Mohammed bin Salman.

For Amnesty International, a Saudi purchase of Newcastle would be another case of “sportswashing” by a nation eager to shift the focus from its government”s abuses. Staveley also brokered the 2008 Abu Dhabi takeover of Manchester City, transforming a club with little history of success into the Premier League”s most dominant team over the last decade fueled by the emirate”s wealth.

“Saudi Arabia (is) attempting to use the glamour and prestige of Premier League football as a PR tool to distract from the country”s abysmal human rights record,” said Felix Jakens, who heads campaigns for Amnesty International in Britain.

The Public Investment Fund did not respond to messages seeking comment. Amnesty has urged the Premier League to subject the takeover to significant scrutiny.

“All businesses need to safeguard against any possible complicity in human rights violations,” Jakens said, “and football is no different.”

While global governing body FIFA introduced a human rights policy in 2007, the Premier League does not explicitly mention such violations in its guidelines for who makes a suitable owner of a club.

League chief executive Richard Masters said in February that “there are background checks,” but would not elaborate when asked about how new owners are assessed.

The end of the Ashley era will not be lamented by those Newcastle supporters who have grown frustrated with the club”s failure to win a domestic trophy since 1955.

“Hopefully that will end soon. This team is for lovers, not for just merchandisers.”

Ashley bought the club in 2007 but is widely viewed as a figure of scorn in the one-club city whose St. James” Park stadium is affectionately dubbed “the cathedral on the hill.”

The verdict on Ashley is unlikely to be kind. It will shine a light on what has mostly been a chronic underinvestment in the playing squad, his use of Newcastle as a vehicle to promote his business interests, and of a general lack of ambition at a club that has regular home crowds of more than 50,000 and was ranked 19th in Deloitte”s list of the world”s richest soccer clubs in 2019.

Even before Ashley, Newcastle”s recent history is one of dashed hopes, near misses and — ultimately — anguish.

As recently as 1992, the club was struggling in the second division of English soccer and nearing bankruptcy.

The surprise decision to hire a much-adored former player, Kevin Keegan, to his first managerial position proved to be inspired, with “King Kev” saving Newcastle from relegation, guiding it to promotion the next season, and leading a team of entertainers to the brink of winning the Premier League in 1995-96 before a late-season implosion saw Manchester United snatch the title.

It remains the closest they”ve come to winning the Premier League, with a roll-call of high-profile managers failing to meet the high expectations of fans.

Kenny Dalglish, Ruud Gullit, Bobby Robson and Graeme Souness coached the team between 1997 and 2006, during which time Newcastle was twice an FA Cup finalist and also reached the semifinals of the now-defunct UEFA Cup.

Under Ashley, who was initially popular with fans as he donned a Newcastle jersey to watch matches alongside supporters in the stands, the team has only finished higher than 10th on one occasion – in 2011-12.

There have been two relegations (in 2009 and 2016) and a slew of PR gaffes, including briefly renaming St. James” Park the “Sportsdirect.com @ St. James” Park Stadium” and agreeing to a uniform sponsorship with an online loan lender that was heavily criticized for charging exorbitant interest rates.

Chastened by those two relegations, Ashley has infuriated fans by becoming the type of owner simply happy to rake in the profits from being a regular fixture in England”s lucrative top flight, leading to the club dismissing the significance of cup competitions.

The team is likely to remain in the Premier League for at least another year, as it is eight points above the relegation zone with nine games remaining of the coronavirus-halted season.

The misgivings about Ashley weren”t helped by his desire to sell the club across various stages of his tenure, but supporters” hopes of seeing the back of Ashley have been shattered more times than they care to remember.

Now, the hope is real. But questions linger about where the funding for a new dawn is coming from.