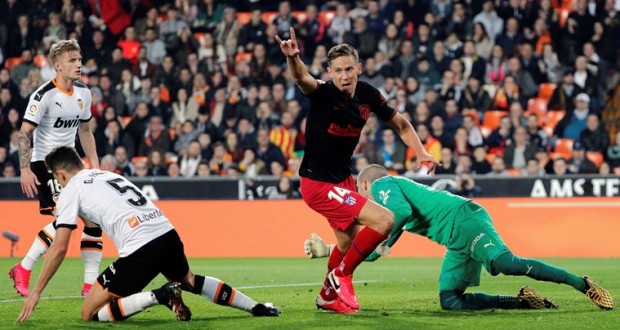 Valencia twice came from behind to draw with Atletico Madrid 2-2 at home in the Spanish league on Friday, extending its winless run against Diego Simeone’s team to 11 matches in all competitions.

Valencia hasn’t beaten Atletico since a league game at home in 2014, with six losses and five draws since then.

The match at Mestalla Stadium came before both teams play in the round of 16 of the Champions League next week, when Atletico hosts Liverpool on Tuesday and Valencia visits Atalanta on Wednesday.

“Our performance today gives us confidence going into Tuesday’s game, that’s important for us,” Madrid midfielder Marcos Llorente said. “We knew it was going to be complicated to play against a team like Valencia in this stadium.”

Llorente opened the scoring for Atletico from close range in the 15th minute after a nice exchange between Angel Correa and Victor “Vitolo” Machin inside the area. It was the first ever Spanish league goal for the former Real Madrid player, and first for Atletico since he joined the club this season.

Gabriel Paulista equalized with a header in the 40th after a cross by Maxi Gomez, but Thomas Partey put Atletico ahead again three minutes later with a well-struck low shot.

Valencia evened the match in the 59th with midfielder Geoffrey Kondogbia completing a long free kick cross by Dani Parejo.

“It was important to rebound from the losses in our last two matches,” Kondogbia said. “We showed that we could play better. We need to keep this same attitude.”

Defender Gabriel Paulista was unable to finish the match and had to leave the field on a stretcher because of what appeared to be a right ankle injury sustained in stoppage time.