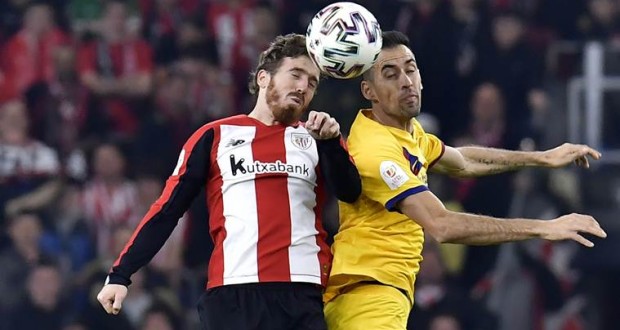 Athletic Bilbao moved closer to its fourth Copa del Rey final in 12 years by defeating Granada 1-0 in the first leg of the semifinals on Wednesday.

Iker Muniain scored the winner in the 42nd minute after an assist by Inaki Williams. The goal had to be confirmed by video review as it appeared Williams controlled the ball with his arm before making the low cross for Muniain’s close-range shot.

The second leg will be on March 5 at Granada, which is trying to reach its first Copa final in more than six decades.

“We could have scored more goals,” Athletic coach Gaizka Garitano said. “But even if we had won 2-0, it still wouldn’t be over. It’s a very even semifinal.”

Real Sociedad will host second-division club Mirandes in the first leg of the other semifinal on Thursday. Sociedad eliminated Real Madrid in the quarterfinals, while Athletic ousted Barcelona.

Only the semifinals are being played over two legs this season. All other rounds were played in single-elimination matches.

Athletic had most of the significant chances at San Mames Stadium, with Granada threatening sporadically on counterattacks and with long-range shots.

The hosts had two goals disallowed for offside after video review, one in the 49th and another in the 61st.

“We needed to be more precise on the counterattacks,” Granada coach Diego Martinez said. “But it’s still all up for grabs.”

Veteran Granada striker Roberto Soldado was shown a yellow card that will keep him from playing the return match next month.

Athletic is the Copa’s second most successful club with 23 titles, behind Barcelona’s 30.

The Basque Country club is trying to reach its first final since 2015, when it lost to Barcelona. It also lost to the Catalan club the previous two times it reached the final _ in 2009 and 2012. Athletic’s last Copa title came in 1984.

Granada, back in the first division this season after a two-year absence, last played in the Copa final in 1959, when it also lost to Barcelona.

It hadn’t reached the semifinals since 1969 before eliminating defending champion Valencia in the quarterfinals.

Athletic is one point ahead of Granada in ninth place in the Spanish league standings.