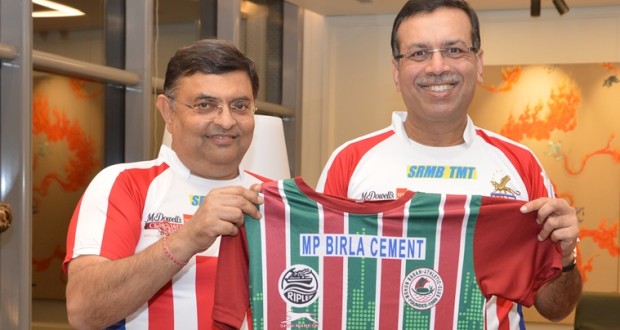 Mohun Bagan to enter ISL next season after merger with ATK

Mohun Bagan and two-time ISL champions ATK have announced that they will merge and form a new club that will enter the next season of the cash-rich Indian Super League (ISL). The much-awaited development was confirmed Thursday at the Mohun Bagan club in Kolkata, where officials of both clubs were present.

Under the merger, the RP-Sanjiv Goenka Group (RPSG) has acquired a majority stake in Mohun Bagan Football Club (India) Private Limited. The new football club will have brand names of ATK and Mohun Bagan.

RPSG Group will become the majority shareholder in the new club with an 80 per cent stake, while Mohun Bagan Football Club (India) Private Limited will own the remaining 20 per cent.

The merged club will come into existence from June 1, 2020 and will compete in Indian Super League season 2020-21, along with other important competitions of the All India Football Federation calendar. It was also announced that the members of the Mohun Bagan Athletic Club will continue to get discounted tickets for all home matches.

As the country’s premier football league, the 2019-20 ISL winner will get direct entry into the group stage competition of the AFC Champions League, the first such opportunity for an Indian football club.

‘Everything will be the same’

Sources close to Mohun Bagan confirmed to the indianexpress.com that there will be no change in the club crest and other symbols associated with the Mariners.

Mohun Bagan Athletic Club, established in the year 1889, is a 130-year-old club with over 100 major titles is synonymous with the rich footballing tradition in the country. ATK is a two-time winner of the Hero Indian Super League. The club won the inaugural ISL edition in 2014 and won the second time in 2016.

The Club won IFA Shield defeating East Yorkshire Regiment on 29th July, 1911 and created history which influenced the Indian struggle for freedom against the British. The government of India released a postage stamp in 1989 to commemorate this famous victory. This is the only postage stamp in India based on a football club.

Commenting on the merger and the opportunities it presents, Mohun Bagan Chairman Swapan Sadhan Bose, said: “Their vision (ATK’s) on Indian football aligns with our philosophy and our combined forces will surely take the club to a bigger and greater heights. In this respect it is a red-letter day in the history of this iconic institution.”