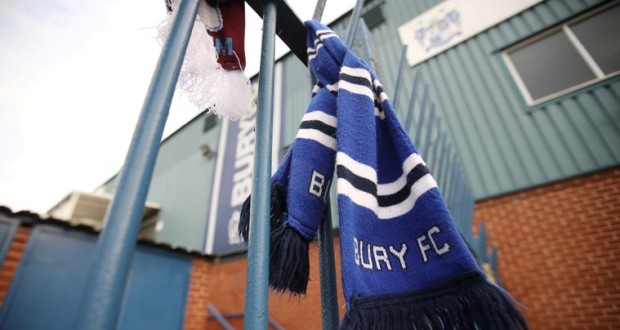 Bury FC doesn’t exist any more, but its fans continue to serve it

Michael Curtis still comes to Gigg Lane every day, Monday through Friday. He pulls in at 7:30 a.m., just as he used to, and makes the short walk to the building past a makeshift shrine — a jumble of different teams’ scarves, flags and jerseys from the days when Bury Football Club was fighting for its life.

Half an hour or so later, the others start to arrive. His mother, Joan, is here by 8, at the soccer club where her father played and where she has worked for almost half a century. Michael’s sister, Lynne Kent, comes down most days, too. Other than coach, Joan and Lynne have occupied pretty much every post imaginable at the club: marketing, administration, season-ticket sales.

By 9, Gordon Sorfleet, once Bury’s media manager — a role that always encompassed far more at a shoestring operation like Bury than it would at one of Manchester’s giant clubs, 20 minutes or so down the road — is in, and so is Martin Kirkby, the bar manager.

It has been three months since Bury, unable to meet its financial obligations or find an owner to take over from the reviled Steve Dale, was thrown out of the English Football League. It is only a couple of weeks before it will be formally liquidated, before the club that traces its roots to 1885 ceases to exist entirely. It has been a “slow death,” Curtis said, and the remaining caretakers long for its completion. Only then can they start work on forming a new club in its place.

For now, these five — together with two staff members at Carrington, the training facility the club rents from Manchester City for 1 British pound a year — are all that is left, the last remnants of a club that closed its doors, for the last time, in August, the final link to 134 years of history.

They spend their mornings busying themselves with odd jobs. Joan has kept the fan lottery going, counting up the money received on an adding machine she has used since the 1970s. Fewer and fewer people are playing, she said: Most of them worry that the money might end up with Dale. “And nobody wants to give a penny to him,” said Curtis, her son.

Sorfleet’s responsibilities, now, extend to no more than “a little bit of tidying up.” The bars at the stadium have all been mothballed, closed and shuttered, so now Kirkby’s role is “washing up, a bit of laundry, keeping the place secure.” He worries that people might start to clamber over the walls, in search of a game of soccer.

“We’re conscious that if one or two get in, it might start to get out of hand,” he said. On the weekends, a couple of them will drive past now and then, just to make sure nobody has broken in.

There is not much more any of them can do. The phone and the internet were cut off months ago. There is still power, although they try not to use it because they know the bill is overdue. The only heat comes from a portable gas canister fan brought down a few weeks ago. It has been placed next to Joan. “He said to tell him when the gas runs out, and he’ll replace it,” she said.

Curtis is the exception. He was the groundskeeper here for 26 years. “Was? I don’t like that past tense,” he said. Nobody has played on the field at Gigg Lane since July 24, when Blackburn Rovers came for a preseason friendly ahead of a season that, for Bury, never started. It is not yet clear if anyone will ever play here again.

Still, though, once a week or so — depending on the weather — Curtis goes out and cuts the grass, making sure the playing surface is as pristine as it can be. It is, he said, a good field; he is proud of it. “We’ve seen with other clubs, the stadium falls into disrepair,” he said. “We don’t want it to go to wrack and ruin, whatever happens.”

Like the others, Curtis is not being paid. He has not been paid for months. The hope is that liquidation might at least trigger a redundancy package, the British term for a severance payment that might deliver some of his lost wages. As far as his friends and neighbors are concerned, he must be “either stupid or mad” to continue to come to work. His family, at least, understands: His mother and sister are here with him, after all. He met his wife at the club, too.

Even he, though, is not entirely sure what draws any of them here. “We ask ourselves that every day,” he said.

They offer a variety of answers. There is a practical consideration: Walking away might affect their severance, depending on how the club is liquidated.

Boredom, too, is a factor. Sorfleet has tried to find work, but at 56 has found that he is considered “too old” for the roles he has pursued. He has found the abrupt end of a job that once occupied almost all of his week a difficult change. “I hate Saturdays now,” he said. “I can’t really watch any football anymore. I don’t even look at the results.”

He is not alone in that. Many of the club’s fans have found the empty weekends dispiriting, too. To fill the void, one group has started visiting the three pubs in the stadium’s immediate vicinity on a rotating basis, watching old Bury games on tape, doing their bit to help meet the shortfall in the pubs’ income.

It is a warm gesture, but it is a drop in the ocean. “A lot of the pubs and cafes have had to lay off staff,” Kirkby said. “They’re saying that one of the pubs might have to close, just because they don’t have the money they made on match days.”

But it is those who devoted their lives to Bury — as both fans and employees, the club’s heart and its soul — who feel its absence most. That is, Curtis said, the other force drawing them all here. “We do it for love of the club,” he said. “It’s out of loyalty.”

He knows, of course, that the club is gone. “It’s dead,” he said. “It’s not going to come back. There is no phone, no heating, no internet. But we want to draw a line under it, not to be hanging around, still dangling.”

What he hopes — what all of them hope — is that, at some point, new life will spring from old. There is talk in the town of a new club, a phoenix team, arising once old Bury’s last rites are read.

It may play at Gigg Lane — the stadium is subject to an order that it has to be preserved for community use — or it may not. It may enter right at the foot of English soccer’s squat pyramid, or it may enter a little higher. “They know that they don’t want a couple of thousand fans going to see a Bury team play in villages,” Sorfleet said. “The cost of policing it is too much.”

It would not be a professional club, at least not at the start. It would not offer any of them full-time employment. It may not even win back all those fans who now spend their Saturdays adrift. “People’s habits change,” Kirkby said. “And once they do, it’s hard to get them back.”

But it would be something: a soccer club in Bury again. It is that prospect, in part, that keeps them coming to work. “I don’t want to let it go,” Curtis said of his field. “Because it would cost a lot to get back up to scratch.”

So he comes in, with his sister and his mother and two of his old colleagues, every morning, just as he used to. And once a week, he cuts the grass. Just in case. “If you told me we had to play a game tomorrow,” he said, “the pitch would be ready.”