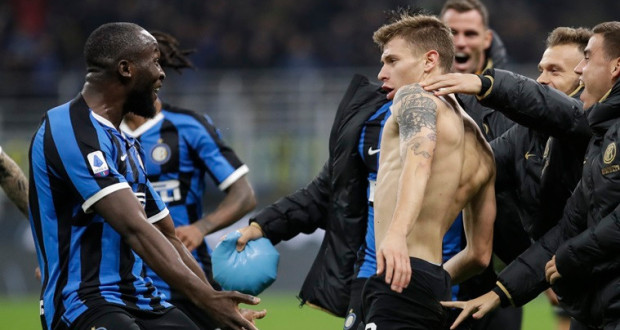 Nicolo Barella scored his first league goal for Inter Milan as the Nerazzurri come from behind to beat Hellas Verona 2-1 and move top of Serie A on Saturday. Barella struck a stunning winner seven minutes from time after Matias Vecino had canceled out Valerio Verre’s penalty for Verona. Inter moved two points ahead of eight-time defending champion Juventus, which hosts AC Milan on Sunday. Verona remained ninth.

Inter was in need of a boost after letting slip a two-goal lead to lose 3-2 at Borussia Dortmund in the Champions League on Tuesday. But it went behind in the 19th minute when goalkeeper Samir Handanovic tripped Mattia Zaccagni and Verre drilled the resulting spot-kick powerfully down the middle.

Along with Juventus, Verona had the best defensive record heading into the weekend and Inter struggled to break the visitors down. But it laid siege to the Verona goal and it eventually paid off in the 63rd minute when Vecino headed in Valentino Lazaro’s cross. And Inter snatched all three points when Barella cut inside from the left and curled an unstoppable strike into the top corner.

Napoli was jeered off after a 0-0 draw at home to Bologna _ the team’s fifth successive match without a win. There was a tense atmosphere before the match, with the team bus greeted by whistles and offensive chants. The same happened when the players came out for the warm-up, while there was silence when the players’ names were readout. Napoli is 12 points behind Inter.

It was a first win in seven matches for Torino. Grosso replaced Eugenio Corini on Tuesday.