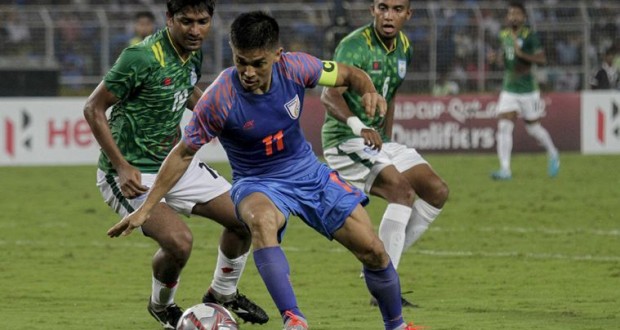 Slow at the back, conceded a silly goal: ‘India really weren’t a threat against Bangladesh’

Adil Khan’s header in the dying minutes of normal time helped India salvage a draw against Bangladesh in Kolkata on Tuesday.

The Blue Tigers, who put in one of their most forgettable matches of this campaign, played out a 1-1 draw against the Bengal Tigers.

Saad Uddin gave Bangladesh the lead in the 42nd minute but Adil Khan ensured that India at least secure a point from the home match with a timely equaliser in the 89th minute.

A defeat at home would have severely dented India’s hopes of advancing to the next round.

However, it was Bangladesh head coach Jamie Day who summed up the best anaysis of India’s performance. “India really weren’t a threat today against Bangladesh,” he said moments after final whistle.

“Before the game, if you had said we’ll get a draw out of it, I would have taken it. Disappointing to have conceded from a set-piece, but India deserve credit for how they kept going. If you saw the game, India didn’t have a shot at the goal, and they saved one off the goal-line. We had some good chances, and it shows how far we have come as a team,” he added in the post-match press conference.

Day’s views are probably right with India playing much of the game with aimless long balls. Why the midfield was bypassed for the majority of the game is also beyond conjecture. Time and again India’s defensive frailties were also exposed for head coach Igor Stimac to solve.

Some of the decision like Sahal not coming into the final third, speculative lobs being played up time and again caused India more harm than good.

Casual errors and below par performance only added more misery.

What Stimac’s boys also missed was an enforcer in the middle of the park.

Unhappy with the result Stimac in his assessment said that his side was sluggish in defence. “Not happy with the result. We pushed until the end but our scoring was not good enough and that was the reason why we didn’t win the match. Everything was in our hands but we failed to get the result.”

“Quick passing from the back opens the gaps but we were slow at the back. We gave a silly goal and you cannot win games giving away such goals. Today was not our lucky day.”

“We are in a learning process. Decision making was poor but we have to be patient. But the biggest thing we need to learn today is not to repeat the mistakes.”

“You could see that India is playing different football, we’re trying to play more technically but there’s still much work to do. We must stay confident and optimistic for the games coming ahead,” he explained.

“I am not accusing anyone. They are my players and I am backing them to succeed,” he signed off.