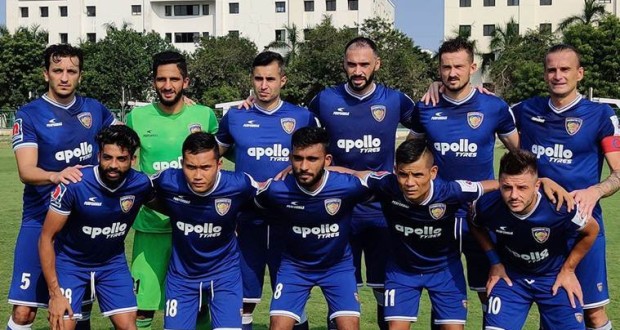 New signing Rafael Crivellaro gave CFC an early lead from the spot as Andre Ettienne levelled the scoreline for the visitors later in the first half.

This was CFC’s first outing after their pre-season camp in Ahmedabad and Bhubaneswar.

Vishal Kaith started in goal with Edwin Vanspaul and Jerry Lalrinzuala as full-backs. Eli Sabia and Lucian Goian were the central defenders as another new import in Masih Saighani started ahead of them in midfield.

CFC began brightly and earned an early penalty after some good interplay between Romanian Dragos Firtulescu and Edwin on the right.

The Romanian spotted Rafael’s run into the box, only for the latter to be fouled before he took a shot. Rafael stepped up himself and powered the ball past Gokulam keeper Ubaid CK.

Gokulam looked to hit back immediately and had two chances which fell to striker Henry Kisekka. The Ugandan, however, shot wide on both occasions.

The visitors did draw level past the half hour mark, when another of their foreign players slotted home at the far post in the form of Andre Ettienne.

Both teams were unchanged at the break. However, the coaches did ring in the changes shortly after in the searing afternoon Chennai heat.

Karanjit Singh replaced Vishal at the goal as youngsters Hendry Antonay, Remi and Deepak Tangri also came in along with Maltese forward Andre Schembri among others.