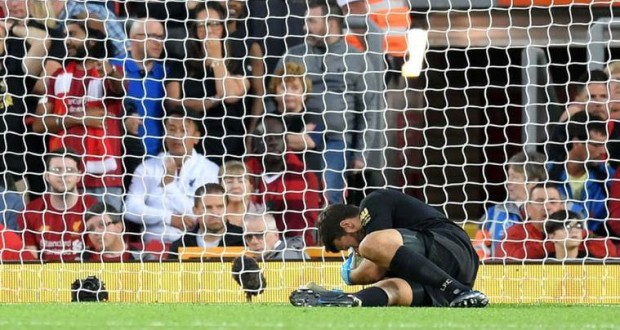 Alisson Becker ruled out until mid-October, Aymeric Laporte out for six months

Liverpool goalkeeper Alisson Becker will be out until after the next international break in mid-October but midfielder Naby Keita should return to training with the first team next week, manager Juergen Klopp said on Friday.

Brazilian Alisson injured his calf in Liverpool’s Premier League opener against Norwich City last month and the European champions have kept only one clean sheet in all competitions in his absence so far.

“Alisson looks good and he is improving, but we cannot put any pressure on it,” Klopp told reporters ahead of Saturday’s home game against Newcastle United. “It was a really serious injury in the calf.

“It is now much better and that’s good for us and good for him, but we don’t know exactly (how long it will take). The target was always after the next international break.

“Naby is close. He could be in training when we come back from (Liverpool’s Champions League group stage match against) Napoli next week.”

Newcastle are 14th in the table under new manager Steve Bruce but Klopp is not taking them lightly after they beat Tottenham Hotspur away last month.

“They are very difficult to play against,” the German said. “The style is similar to last season. They defend with a big heart. It won’t be easy.

“I’m really impressed by the things they have done so far. Newcastle had something like 20% possession against Tottenham but they deserved the three points. They will fight like crazy.”

Liverpool are seeking their fifth victory of the season and a club record-extending 14th straight top flight win. Klopp’s side are also unbeaten at Anfield in their last 40 league matches.

“It was clear we had to change things,” he said. “We had to make Anfield a fortress again. We created a proper basis together, it became more difficult for teams to get something.”

Aymeric Laporte out for six months

Manchester City defender Aymeric Laporte will be out for up to six months after undergoing surgery on his right knee, manager Pep Guardiola said on Friday.

French centre back Laporte damaged his cartilage and lateral meniscus in a challenge with Brighton and Hove Albion defender Adam Webster and was carried off in City’s 4-0 league victory last month.

When asked how long Laporte will be out, Guardiola said: “Five months, six months. Next year sure, January or February.”

Laporte made 35 league appearances during their title-winning campaign last term, with midfielder Bernardo Silva the only City outfield player to play more matches.

His injury leaves City with Nicolas Otamendi and John Stones as central defenders, following Vincent Kompany’s departure to become the player-manager at Anderlecht at the end of last season.

Guardiola confirmed Stones could feature at Norwich City on Saturday after recovering from a niggling thigh issue.