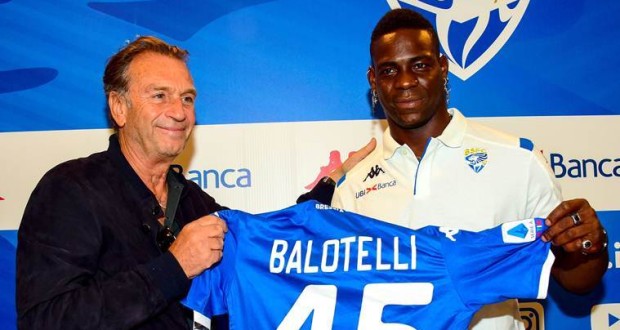 After a nomadic career of controversy, Mario Balotelli has gone back home.

Balotelli has signed a “multi-year contract” with newly promoted Brescia after his deal with Marseille expired, and will return to Serie A with his hometown club after an absence of three years.

Balotelli was born in Palermo but moved to Brescia at the age of two and his adoptive family still lives there, although his father died in 2015.

“My mum cried initially when I told her that I might be going to Brescia, she was very happy,” Balotelli said at his first news conference as a Brescia player on Monday. “My father was from Brescia, he supported the team, and it was his dream to see me play with this jersey.”

Balotelli’s last spell in Italy was a miserable one as he struggled with injury and scored only once in a season-long loan at AC Milan before returning to Liverpool in 2016 and moving immediately to France, resurrecting his career first with Nice and then at Marseille.

That was a second spell at Milan for Balotelli, who also played for the Rossoneri’s city rival, Inter Milan.

“I chose Brescia because as soon as I knew Brescia was in for me I honestly didn’t think of anything else,” Balotelli said. “This is my city, I can give so much more here.”

“I’m not scared, the aim is to make this team grow as much as possible. I have zero fear of failing, I think you have more than me, I’m fine, very calm.”

Excitement is growing in the city in the north-west of Italy. There were long queues to buy season tickets on Monday morning, while Balotelli’s news conference was delayed because of the number of fans who gathered outside the hotel, chanting his name.

Balotelli, with his physique, technical ability, and qualities as a finisher, is one of the world’s best strikers but his on-the-field achievements have often been overshadowed by his antics off the field.

During his time at Manchester City, in which he won the league title, Balotelli was sent off four times, threw a dart at a youth-team player and was involved in an incident that saw fireworks explode in his bathroom. After scoring against Manchester United, he revealed a T-shirt under his City jersey reading, “Why Always Me?”

“I don’t really watch television or read coverage about myself, so when there are negative stories about me, they are told to me by others, but I’m used to it by now,” Balotelli said. “You can’t be loved by everyone.”

The 29-year-old Balotelli is also hoping to use his return to Serie A as a springboard back into the Italy side.

Balotelli was included in Roberto Mancini’s first two squads and played his first matches for Italy since the 2014 World Cup but the forward has not been called up in nearly a year.

However, he said he spoke to Mancini when the Azzurri coach called him on his birthday last week and that a spot in the Italy squad for next year’s European Championship is “absolutely” still his aim.

“With Mancini, a return to the Italy team depends on me,” Balotelli added on Sky Sport Italia. “Before, that was not the case. Because the current coach is fair.”

Balotelli has 14 goals in 36 matches for Italy.

The Italian league begins this weekend but Balotelli must wait to make his debut as he serves a four-match ban following a straight red card in his final game for Marseille against Montpellier in May.

Balotelli’s first appearance for Brescia will likely be the home match against eight-time defending champion Juventus on September 25.