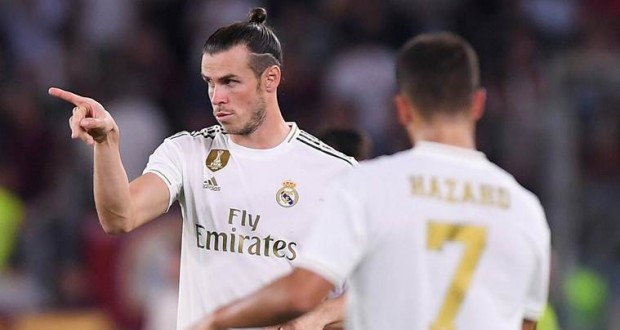 Real Madrid coach Zinedine Zidane heads into the new season welcoming Eden Hazard but also having to deal with the conundrum of unwanted star Gareth Bale.

Zidane has rarely had a less than kind word for any of his players, but last month he bared his desire to get rid of Bale by saying the club was negotiating the player’s transfer and his exit would be “better for everyone’s sake.”

The deal Zidane mentioned with an unspecified club never materialized and Bale, for whom Madrid paid a then world-record fee of 100 million euros (then $132 million), is still on Zidane’s squad ahead of the team’s Spanish league opener at Celta Vigo on Saturday.

Madrid can still sell Bale until Sept. 2, but the closure of the English transfer market greatly reduces the possible suitors who could take on his reported salary of 15 million euros ($16.7 million). Spanish media reports that Bale already rejected a big offer from a Chinese club.

So now Zidane can either rebuild his relationship with the aloof Wales forward or ostracize the team’s highest-paid player and leave him on the bench in hopes the club will find a new home for him during the winter market.

Bale had his chance to become Madrid’s leader last season after the exit of Cristiano Ronaldo to Juventus. Instead, he and most of his teammates underperformed and were out of the running for a major title several weeks before the end of the season.

Zidane returned to the club in March, less than a year after he had stepped down following a third consecutive Champions League title. With the team in disarray, he promised an overhaul of the squad in the summer.

Getting rid of Bale, who has swung from scoring eye-popping goals to being criticized by fans for his poor play, was supposed to be the key piece to the makeover of the 13-time European champions.

HAZARD AND THE REST

While Madrid has failed to find a new club for Bale, it successfully bolstered the squad and its fans’ expectations by bringing in Hazard from Chelsea.

After several seasons without signing a major star and instead snatching up promising youngsters, club president Florentino Perez changed tactics this offseason following a dismal campaign when the team sorely missed Ronaldo’s goals.

The Belgium midfielder will lead a team that already has Ballon d’Or holder Luka Modric in midfield. Karim Benzema will have some competition at striker after the arrival of 21-year-old Luka Jovic from Eintracht Frankfurt.

Madrid has also bolstered its defense with center back Eder Militao from FC Porto and left back Ferland Mendy from Lyon.

Mariano Diaz, Francisco “Isco” Alarcon and James Rodriguez, who is back after his loan at Bayern Munich, are still with the team despite speculation they could be sold.

Marco Asensio, who was hoping to bounce back after a sub-par year, will be out for several months after needing surgery to repair a torn ligament and meniscus in his left leg.