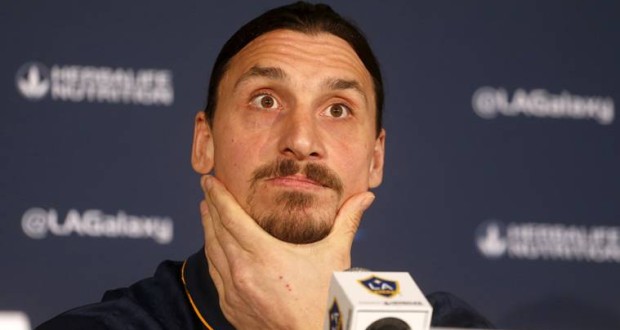 Zlatan Ibrahimovic likened himself to Benjamin Button as he played down concerns about what kind of impact he will have on the MLS at the age of 36 by declaring “I was born old and I will die young” during his unveiling at LA Galaxy on Friday.

The Swedish striker left Manchester United to join the MLS side in what many believe will be the final stop in an illustrious career which has spanned almost two decades.

But just in case fans and pundits thought that Ibrahimovic had turned up in California to get an easy paycheck at the twilight of his career, and without doing much work, he dispelled the suggestion.

“I feel young, I feel like Benjamin Button. I was born old and I will die young,” he said comparing himself to the fictitious character who ages in reverse.

“Don’t worry about my age… When I came to England they all said I was old. I came in a wheelchair and after three months I conquered England. Then they said I was flying.”

“So I know what I’m able to do, I know what I will do, and I came here to win,” added Sweden’s all-time leading scorer.

Ibrahimovic, who has amassed an Aladdin’s cave of silverware that includes 11 league titles in four European countries, is Galaxy’s biggest foreign acquisition since David Beckham in 2007.

But even though his trophy cabinet is close to bursting, the man who calls himself “a lion” is determined to add some more prizes to his collection while sprinkling some stardust on the MLS.

“Tomorrow is a big game and I’m already involved so I feel excited,” Ibrahimovic told a news conference ahead of Saturday’s match against new cross town rivals Los Angeles FC. The Lion is hungry.”

He made himself available to play on Saturday despite working his way back from a knee injury that kept him sidelined for part of his two-year tenure at Manchester United.

Ibrahimovic said he has been drawn to Los Angeles for years and had expected to join Galaxy prior to his move to United, but the deal fell through. He said a dinner with Beckham convinced him to make the move.

“I was asking him, ‘How is it? How was it for him?’ And he was only positive,” said the Swede.

“And I just got a message from David that said, ‘Just enjoy’.” Ibrahimovic said he plans to leave his mark on young soccer fans in Los Angeles who may not be familiar with his career so far. If they don’t know me, I will make sure that they know me,” he said with a grin.