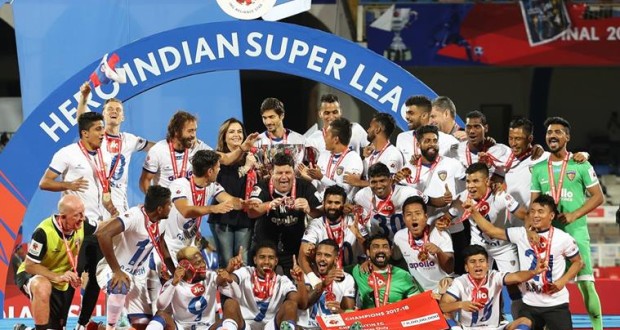 Chennaiyin FC are crowned champions during the final of the Hero Indian Super League between Bengaluru FC and Chennaiyin FC held at the Sree Kanteerava Stadium, Bengaluru, India on the 17th March 2018
Photo by: Ron Gaunt / ISL / SPORTZPICS

Eyeing a domestic double, reigning Indian Super League winners Chennaiyin FC will leave nothing to chance when they face Aizawl FC in their Super Cup campaign opener in Bhubaneswar on Saturday. Having upset Bengaluru FC in the ISL title clash earlier this month, Chennaiyin will be high on confidence, as they kick off the inaugural tournament’s pre-quarterfinals stage along with the former I-League champions at the Kalinga Stadium.

Chennaiyin coach John Gregory is likely to test a few fringe players while resting some after a hectic ISL season. The southern team has registered only four foreigners for the tournament — Mailson Alves, Jaime Gavilan, Jude Nworuh and Raphael Augusto. Mailson, who plays in a defensive role, paved the way for Chennaiyin’s come-from-behind win in the ISL final with two brilliant headers, which found the back of the net. For Aizawl FC, the Brazilian could be the man to watch out for alongside Raphael Augusto.

Keenan Almeida is expected to take the place of Inigo Calderon at right back, and also in reckoning are Dhanachandra Singh and Fulganco Cardozo. Mohammed Rafi could take the place of doubtful starter Jeje Lalpekhlua upfront. Goalkeeper Karanjit Singh too could be rested.

Aizawl FC, who finished outside the top four a year after their stunning debut-season triumph in the top-tier, will be keen to produce a much-improved show and progress further in the knockouts. Aizawl have gained from their AFC Cup outings and that experience could help the side in this tournament.

Up against a side like Chennaiyin, Aizawl no doubt have their task cut out, but they certainly have it them to earn full points. Andrei Ionescu’s playmaking skills and set-piece ability coupled with the threat posed by David Lalrinmuana will have Chennaiyin FC on their toes.

Afghan defender Masih Saighani has held fort through the I-league despite the absence of the injured Kareem Omolaja Nurain, and he will again be a key player in Aizawl’s scheme of things. Lalchhawnkima, on-loan from Mumbai City FC, has also proved to be a great replacement.

On the eve of the game, Chennaiyin gaffer Gregory was asked about entering the tournament carrying the tag of ISL champions. “I don’t think it (ISL champions tag) is a burden. We are the champions of the Indian Super League,” he said.

“But we know that we become the target as champs as people tend to raise their game against you. That is a small price to pay if you ask me. We can’t wait to get started with it.”

The former Aston Villa coach also felt that the tournament’s knock-out format will not affect the team’s plans going into the game. “Obviously, at the end of the regular season, we had to go into a play-off which was make or break and the final was also a knockout situation. So we’re used to playing in such scenarios.

“If you win it, you go forward. If you lose, you go out. We know what the situation is and what the regulations are.”